Here’s a nice review of our album by our good friend Les Ray. his radio show is now on Blues and Roots radio worldwide.

‘Miner’s Eyes’ is the second CD by this duo from Cambridge and Bury St Edmunds, and differs from their first – ‘Papers in my Shoe’, released in 2015 – in that it is built around their own compositions, whereas the previous one predominantly contains their versions of traditional songs and tunes in a cajun and bluegrass style. What the two albums have in common is very pared-down, simple (in the nicest sense of the word) arrangements, with just two voices, Gary Woolley’s guitar and Matt Kelly on fiddle, viola or mandolin: very much what you hear here is what you get when you see them live.

Gary takes most of the songwriting credits here (8 out of the 11 tracks), with the key themes of his contributions being industrial decline (‘10,000 Stevedores’, ‘Cairo to Vincennes’, ‘Miner’s Eyes’) along with perhaps a more general sense of melancholy at passing time and loss (‘These Country Lanes’, ‘Walk Right Out the Door’). Matt contributes a tune to end the CD, an experimental song without rhyme (‘The Same Way’) and ‘Slow Toast’, a bittersweet song that also appears in a different version on a CD by Thursday’s Band.

How to sum up this CD in a few words? Fine songwriting, excellent musicianship, delightful harmonies.

I couldn’t review ‘Miner’s Eyes’ without mentioning its very striking cover, the picture of a miner called Lee Hipshire by renowned US photojournalist Earl Dotter. Gary explains how they came to use the photo: “After explaining to Earl who we were and why we wanted to use the photo he agreed we could use it as long as we sent four copies to him, one for him and the rest for Lee’s surviving family. We had an initial email from Earl to say he really loved the CD but in October we received an email from Lee’s son to say he loved the music and it had helped them a lot recently as their mum had also passed away”.

Here we are in action at Thetford Folk Club. Lovely gig with Thursday’s Band and Dusky Sunday. Lovely attentive crowd who appreciated the songs . 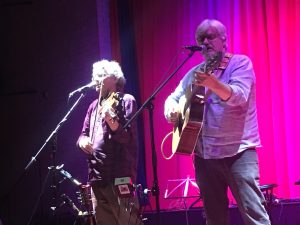 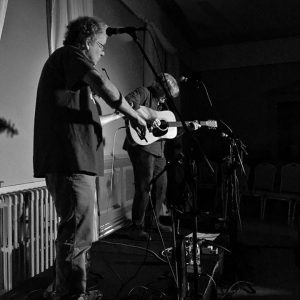 What a lovely album. It’s simple (in the best sense of that word). Well crafted songs performed with great commitment and musicality. Well done lads.

A World of Difference Radio Show on www.bluesandrootsradio.com

We are getting some lovely comments about the album from the radio community. We have a few gigs lined up in the coming weeks.